The image actually predates this blog by a couple of years, taken on March 13, 2005. Back then I apparently liked putting a thin black border around my images. And perhaps pushed the saturation a bit, although I do think that it was actually the result of a plugin replicating that lovely film Velvia.

Some of you might remember Fuji’s Velvia. It’s saturation was something to behold.

Anyway, these prayer beads are on the wrist of a Yamabushi monk as he observed the preparation of a bed of coals. The coals were to be part of a purification ritual—a firewalk.

If you click on that last link, you’ll see that the monks do the actual fire walking. Once they are done, they spread the coals out, clear a path between and let the public stroll through the smoke. No danger of burning the feet, as Goddess, the Boy, and I found out.

Regardless, hopefully you take advantage of this weekend to stretch yourself, whether it be intellectually, emotionally, spiritually, or physically.

Perhaps a bit of all four.

I don’t particularly mind that the school work is completely destroying me in a metaphysical sense.

Because the truth is that it really isn’t destroying me.

Just sapping most of my mental and physical energy.

That is not a bad thing.

But I am thankful for a few moments where I can break away and exercise my creative brain for some school work.

This is a Mokugyo, a piece that we have had in our house for ten years now, in six different homes in three different countries.  I had never given it too much thought, other than the memories that it brought forth.

After spending the weekend learning more about it, the memories mean so much more.

A few weeks ago we announced our sponsorship from Yama Mountain Gear through a program that the owner Gen Shimizu calls mYAMAdventure.

And for those of you who know of our connection with Japan, his company logo is perfect:

This was our view of sunrise from the summit of Fujiyama (Mount Fuji), along with many hundreds of others, taken on the morning of 17 July, 2004. 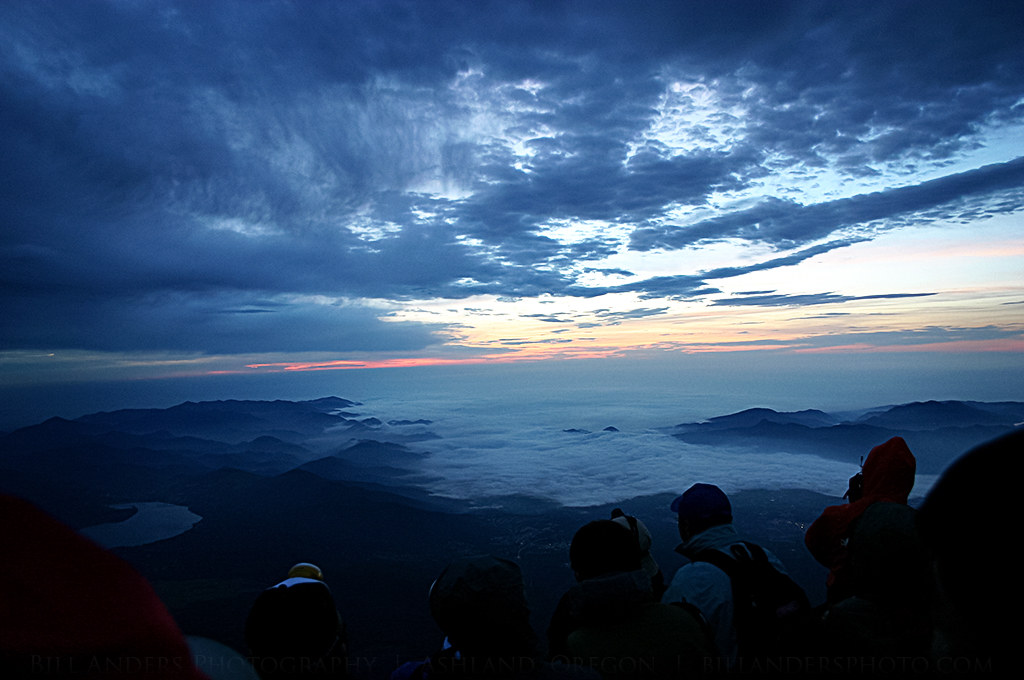 Just having moments like that gives us many, many reasons to be thankful for the opportunities that we’ve had.

This year is no exception with our long walk.  An opportunity that we know is so completely outside the realm of consideration for the majority of the world.  For that we know we are lucky.

As you might recall, we announced our sponsorship in mid-December.  If you don’t recall, it’s likely you are amongst the hundred or so new followers of this blog since then; if that’s you, hang on for the ride.

Back then we mentioned that part of the sponsorship is our part in helping raise funds for the Pacific Crest Trail Association (PCTA), the organization responsible for maintaining and advocating for the trail.  It’s an organization that I spent a good portion of 2014 working with and we’re proud to continue supporting.

It’s early in the new year and we are already up to 8% of our total goal of raising $4,000 for the PCTA, so that they, along with their volunteers, can continue to maintain the trail.

For those of you who have donated (especially you anonymous donors that we can’t thank directly) – THANK YOU!!!

If you’re considering donating, we would appreciate it greatly.  All this year as we’re walking the path from Mexico to Canada, as well as in the following years as we continue to work on the trail so that others may follow.

And if you’re curious how your donation might be used, just click on the graphic above.  It will take you to our fundraising page which has several different suggested donation levels, along with examples of how that amount might be used to maintain the trial.

Thank you so much for you consideration and your support!

Our favorite Thanksgiving experience ever.

So good that every year at this time, Goddess starts perusing airline tickets to see if we can get back there.

But it’s pricey.  At least the memories are priceless.

With a couple of projects in the works that are taking up quite a bit of time, I’m going to have to focus on a different project for you all this month.  I’ll give some details on the other projects later this month.

It’s a bit of fun, looking back at photos I’ve taken in the month of September over the years.  Well, at least the digital years.  I’d really have to do some digging into the negatives and log books to determine which analogue photos were taken in September, but that kind of defeats the purpose.  So we’ll stick to the last 9 years or so.

That means that some of you will recognize some of these photos but a large majority of you will not.  So it’s fun for me to hear new thoughts on images I was producing years ago.

Cosmos in Showa Kinen Park, Tachikawa, Japan, a suburb of Tokyo.  We loved that park.  Every season had a season-appropriate garden display; spring had tulips, autumn had cosmos and other plants.  We’d walk for hours and enjoy the different views.

Unfortunately, our cosmos in the yard aren’t giving a showing quite as nice as these.  It has been a dry summer, even with irrigation.

This photo was taken on September 19th, 2005.  I haven’t reprocessed it since then.  I think it stands on its own as originally presented.

What are your thoughts?

And a few weeks ago, on July 12, 2014, it was the eighth anniversary of my first post of putting words and pictures here.

Here’s the very first picture that I posted here, a detail of a monk’s office table in a Buddhist Temple in Tokyo.  The visit was arranged by some very good friends of ours whose uncle was the head monk at the temple.  Before taking over the temple from his father, he was a professional fashion photographer.

A great host that provided an opportunity filled with experiences that we still talk about.

Some of you have been reading these posts from the very beginning, others are newly arrived.

Thank you to all of you for the comments, the encouragement and the support.

Although this isn’t the last of the “flashback” landscapes, today is the last day of my summer sale on prints (see details below).

Ten years on, this is still one of my favorite images.  Whenever I’m in a funk or just need to refocus my energies, I like to pull up the raw image and work it.  Sometimes I improve upon earlier versions, sometimes not.  Regardless, the moment makes me smile.

It’s simple -> Enter “Summer14” when you check out and receive 15% off pre-shipping costs.