Goddess and I got rid of our Christmas tree last week.  We hadn’t put it up in years and found someone who needed one.

So it’s set up in another home this season and is decorated beautifully.

So, unbeknownst to Goddess at the time, the other day I adopted this tree when we were out at one of the mountain lakes, hoping for a break in the snow and clouds for some late afternoon mountain pictures. 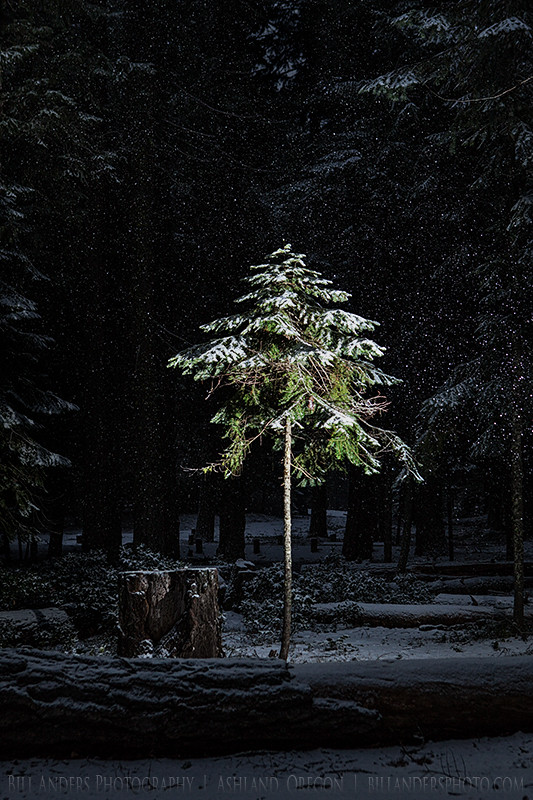 A bit of a Charlie Brown tree, but that’s OK.  Considering the amount of downed trees around it, it’s doing quite well.

Once again, thanks goes to Goddess, my ever-patient VALS, providing the lighting from camera right.

We had quite a storm move through the area starting Wednesday.  It really got rolling early Thursday morning.  Here in town, we had winds gusting up into the 70mph range.  The sensor on a nearby mountain top measured 117mph.

After things settled down Thursday afternoon, I headed out to find some images.  I eventually ended up on Mount Ashland, which received 6″ of snow during the storm.

A good start to the winter. 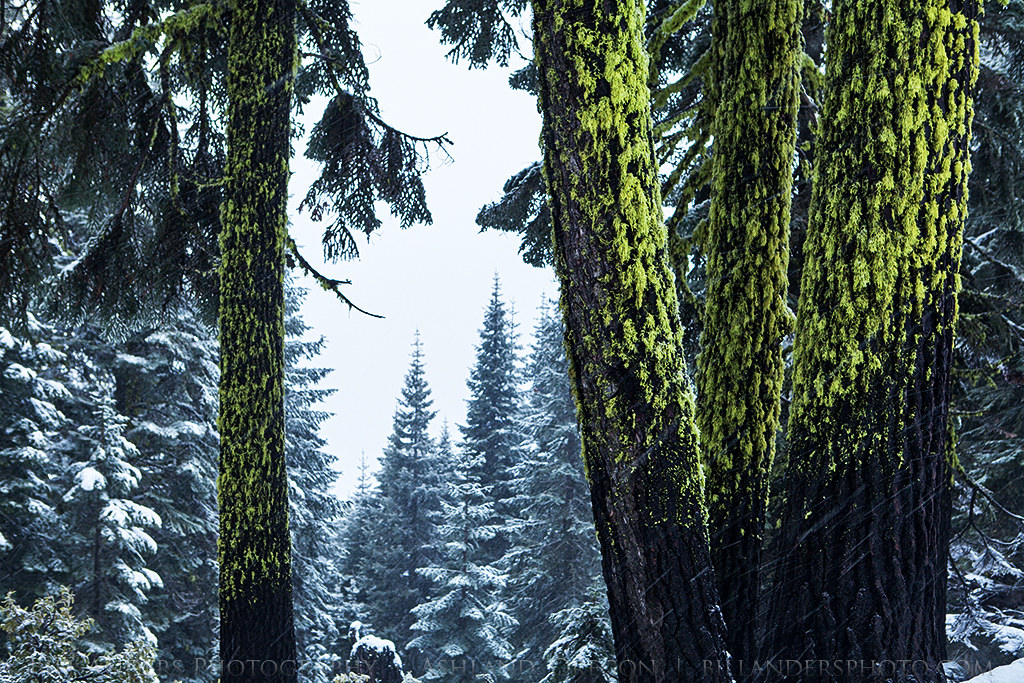 Here’s a handy tip for you – if you find yourself in the forest without any toilet paper, that green moss is a very good substitute.

Hopefully you’ll have a good weekend, wherever you are, doing whatever brings you joy.

This was one of those driving down the highway moments, looking out the window and catching glimpses of what was behind the tree.  Passing  a small opening that let the whole scene open up, glancing to check for oncoming traffic, crossing the road while standing on the brakes, grabbing the camera out of the back seat and running back to the gap.

In just those few seconds, the sailboat had moved from being perfectly centered under Mount Bachelor.

Just a couple of days ago.  Unfortunately, not enough for the ski mountain to open.

But just 20 minutes from our driveway.  Where I didn’t even have to scrape the windows of the car or shovel the drive.

Just 20 minutes away and I was breaking trail, no hint of human traffic, either visually or aurally.

Another week, although abnormally cold here.

Down to -3°F (-19°C) earlier this week, with 8″ (20cm) of snow on the ground.  The cold air was trapped down here in the valley while the upper elevations warmed up.  It was a juxtaposition of reality, with the mountains surrounding us turning brown as the snow melted, we down here in the valley stuck in our houses due to the ice and snow.

It took six days for the schools to open.  It’s been five years since the valley saw snowfall greater than 1″, so the collective memory has forgotten.

Mid-week, we had friends in town.  A quick visit, never long enough.  Goddess and I discussed ways to keep them here, including letting the air out of their tires or padlocking the door to their room.

But during their last couple of years here in the Pacific Northwest, they had not visited Crater Lake.  I declared it would be a shame for them to leave the area without seeing the view.

So after a couple of hours of slip-sliding on the roads to get there, they got to see.  And they understand.

For Goddess and I, it was amazing to see the snow depth difference between today and Black Friday, less than two weeks ago.

About the name of the photo – it’s a dig.  Although I’ve been aware of the chemtrail folks, I’ve recently viewed a lot more traffic on their viewpoints lately.

I’m a skeptical guy.  But their viewpoints?

As I alluded to in yesterday’s post, we were getting snow.  The rocks that we were standing on to take that photo got somewhere between 15″-20″ of snow overnight.

Down here in the valley, we picked up 6-8″, depending on where you stood.  Walking through the forest at sunrise to get this photo, I pushed through knee deep spots in places.

It sure was nice.  Although I couldn’t see the sun.

It was still snowing, as you can see by the streaks in the photo.

Or you can play with the fake snowflakes on the screen by moving your cursor around.  Make it a gentle snow or make it snow sideways.

But back to real weather, we’ve established a trend.

Other than one short-lived snow day in spring of 2012, this is the first measurable snowfall here in town since 2008.  What’s changed?  Goddess and I are here.  Prior to that, the first winter that we lived in Germany was the worst in 40 years.  The second winter, the worst in 41 years.

Anyone want us to move near them?  The stipulation is that it has to look like here.  And feel like here.

While many were standing in line at god-awful early times to get some post-Thanksgiving shopping done, we were driving by so that we could watch sunrise.

It was a great Thanksgiving weekend, spent with friends of many years, people who love to spend the entire day out looking for scenes to capture.  I was able to introduce them to new places and see their different views on what has become familiar to me.

Plus, it’s a bit fun to catch each other in action.  Sometimes funny, sometimes interesting.  Mostly funny.

Like the time I should have taken the path on the other side of the tree, a path that didn’t require any steps over long drops.

But life is an adventure.  An adventure best experienced with friends.

Well, not first snow for the local mountains, but the first chance I had to get up there after they had received new snow.

The first shot of snow was at the end of September, which gradually melted off.  Then another, which did the same.  This one will too, but it will take longer.  If it doesn’t, I’ll be quite happy, as long as there are more layers on top of it.  I’ll be quite happy because this was taken about 1/2 mile from the local ski lodge.  So the more snow on the slopes, the better!

Believe it or not, it’s a color photograph.

This is just to the south of the beginning of almost 20 miles of single track bicycle trails that lead back to our house.  It took me another 45 minutes to drop 2,000′ in elevation before I dropped below the snow line.  From there, the trails were tacky, perfect for flying down the trail.

There are some fire roads in the area, so if that’s your thing, you can hop on those.  But I’m really enjoying the single track, even the very technical parts.  While I’ve spent the last 25 years riding a lot, it’s all been on the roads.  I’ve never been comfortable on the dirt, even though I’ve had this mountain bike for 14 years now.  But with some great trails right out our front door, I’ve decided that it’s time to push myself.

Even though I’ve been heading up there for just the past couple of weeks, my comfort level on the loose stuff, the rocky stuff and the steep stuff has progressed quickly.  Perhaps a bit too quickly, since I don’t have a lot of the safety equipment (just my helmet).  I’ve already had run-ins with trees (including a full face of snow-weighted branch today) and have had to dismount the bicycle over the handlebars.  Luckily I haven’t gone off the side of the trail (yet).

I’m having a heck of a lot of fun, it’s beating me up quite nicely and it’s getting my body and brain ready for ski season, which is right around the corner.

One thing that I think is impressing Goddess the most about living out here is how varied the landscape can be in just a short amount of time.

While driving on McKenzie Highway, just a few minutes out of dense forest, we ran across this view of Oregon’s Mount Washington, looking across an ancient lava field, complete with what is now a completely dead forest.  Another 20 minutes of driving and we were deep in lush, dense forest again, soon reaching moss and fern surrounded waterfalls.