The Berliner Mauer is the German name for the Berlin Wall.

Goddess and I made our first (of what will likely be several) trips to Berlin last weekend.  We had a long weekend, so we took advantage of the Intercity Express (ICE) trains, which are high speed, but thanks to connections and stops, still take about the same amount of time to get there.

But I’m fairly certain that the law frowns on me enjoying a beer while driving.  So we let the conductor do the driving.  But not really for that reason, although it is a nice reason.  We chose the train because when Goddess and I see a city, we see a city.

Off the beaten path.

And that gets exhausting.  So throw a 5-6 hour drive on top of that and it’s almost too much.  So the train saves the day.

I’ve already started posting images from our trip and there will be plenty more to come.  In the three full days of canvassing the city, I shot “only” about 300 images, which is not much compared to previous trips.  By comparison, a three day trip to Kyoto, Japan was worth about 1,200 images.

Of course, not all are keepers.  But in both cases, I still came out with quite a few.

Because that’s how I saw the city.

And if not black and white, the colors were very muted.  It must have been the cold, cloudy German winter days that helped generate that mood.  But I’m certain that the history had something to do with that too.

Here’s a four-shot image of the view out our very modern hotel room.  The stitching is sloppy, mainly thanks to the very wide 10mm lens.  But I’m sure I can get the point across.

If you look closely, you’ll see a brown line.  It’s actually a line of cobblestones, two wide.  And the line traces the route of the Berlin Wall.

Coming from the west, right down the middle of the street, before turning south into a field.

So as I hung out the window and looked, I couldn’t help but think about what it was like 22+ years ago.

So I was explaining to Goddess the image that I remember seeing as a kid, one where the father was holding up his very young baby in a window across the wall so that Grandmother, looking through a window and visible only as a silhouette, could see her grandchild.  It was likely the closest they ever got.

I sure wish I could find that image.  It’s not in Life Magazine’s archive.

But this one is in their archive and it captures the mood that I felt when leaning out the window into the cold winter air, watching the small snowflakes get whipped around in the wind. 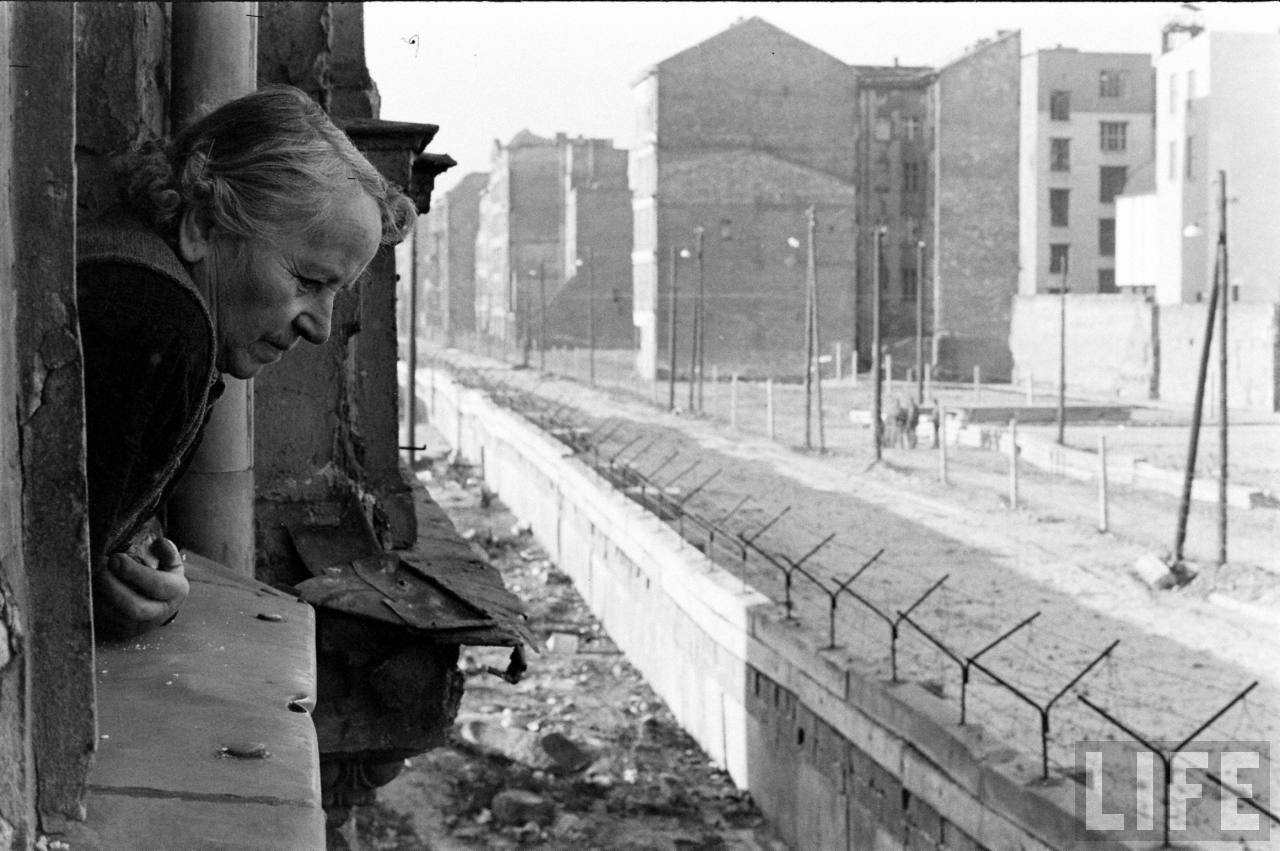 Be grateful for what you have.