Just a few steps to the left (west) of where Skinny was lying.

For me, it’s all about the clouds, although the mountain is nice too. 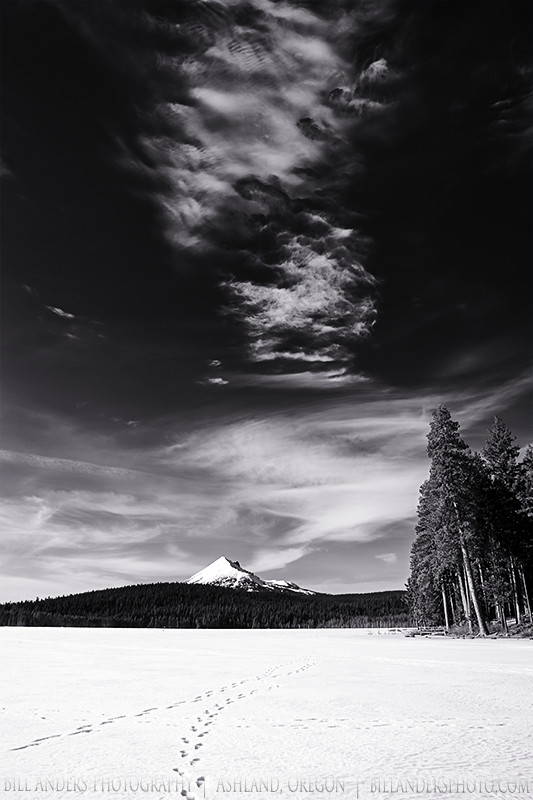 Mount McLoughlin, viewed from the frozen surface of Lake of the Woods, Klamath County, Oregon.

This was taken in March of 2013.  If only we’ve had a winter like that since.

Over the past few weeks I have been culling my photo database.  Starting with my the first images in 2004 when I switched from analog, I’ve been looking at every single one.  I’m up to 2011 so far.

As I look at each one, I’m looking for:

– Technical quality – is it in focus, is it exposed properly, etc.

– Duplication – Is it a duplicate?  If so, is it the best of the rest?

– Uniqueness – Is the image of an event that can’t be repeated?  Will I have the chance to observe it again?

– Sentiment – Does the image have some sort of sentimental value?  Oftentimes, this and the previous step are the same.

It can be quite tedious.

I was never shy with the shutter button when I was shooting film.  That hasn’t changed since I moved to digital, but I know that I do shoot more.  Rarely did I have a 4-roll day with film, but I can easily shoot 200 images in a session.

But they all aren’t keepers.

I haven’t kept track exactly on numbers, but I know that I’ve regained ~120GB of hard drive space.  That’s at a time when I was needing to get at least one new hard drive for storage.  In this case, it’s almost “free money”.

And I’ve already started using the process for the new shoots.  During the session that included last Friday’s image, I shot 58 frames.  I applied those same four steps to the session and now have 10 frames to pick from.

Especially when it comes to landscape, the “duplicate” step is the deciding factor.  I can click back and forth between two images dozens of times to see the minor differences.  Sometimes it’s a matter of flipping the coin.

Anyway, what in the world does all of this have to do with the title?

I wanted to post a slightly different angle of Mount McLoughlin, one from a real winter.  The last one we’ve had in this area was two years ago.  That’s when the mountain lakes froze hard enough that folks could go out and fish, ski, snowmobile, etc.

So I jumped forward to 2013 and went for images of Mount McLoughlin, viewed from the frozen surface of Lake of the Woods and worked one to post here.  Then I realized that today would be the seventh anniversary of Skinny’s Gotcha Day.  Although in reality, it’s our Gotcha Day.

For those of you not familiar, when adopting a greyhound there is a house visit.  The visit is to make sure that the potential adopters have a suitable house and enclosed yard, plus watch the interaction with the greyhounds, the adopters and their families, both human and animal.  For such a home visit, a few greyhounds are brought along.  They are happy, social animals.

We had our eye on a specific greyhound that we had met a couple of times.  The adoption volunteers brought him, along with a couple of other greyhounds, including Skinny.  Skinny wasn’t on the list to be adopted.  Instead he was being reintroduced to the home-visit process and new people after he had been returned to the adoption agency.  He didn’t mesh well with his previous adopted family and had, as we learned, a “pupitude”.

So the group enters the house.  The grey that we had our eye on and the others shyly enter and sniff around, staying close to the volunteers.  Not Skinny.  He immediately explores the whole house, then flops down in the middle of the living room floor.

He announced he was home. 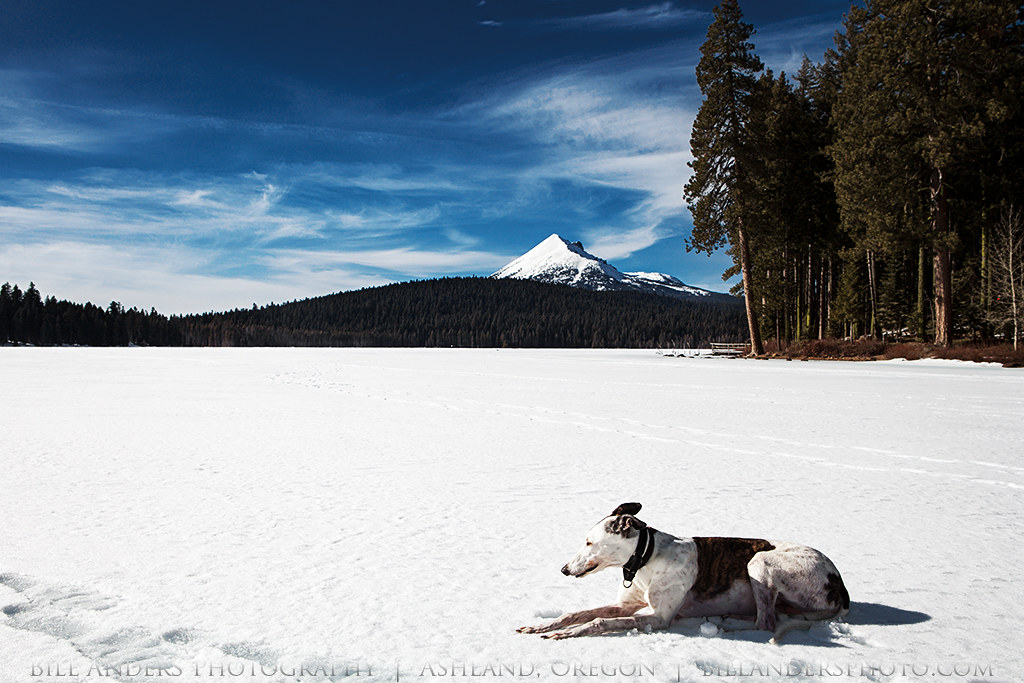 He never lost that pupitude.

Never, not even at the end.

He still makes us smile.

Thanks for picking us, Skinny!

A couple of shots from a few weeks ago when we escaped the heat and headed to the coast.

This trip was Skinny’s first experience with the ocean.  He loved the wide beach and sand for running, but wasn’t too sure about the moving water.

Or nose, in this case.

He was quite content to lie where he was, a good 40 yards or so from the water, which was also several feet below him, as the rushing waves had built up a nice sandbar at the edge.

But there’s always a good set of waves that haven’t followed the rules, which is why you should never turn your back on the ocean.

Or keep your eyes closed too much.

A few seconds later and the water was around his feet, forcing him to bound out of the way of the evil 1/2″ deep water.

Unfortunately, I didn’t get that shot.  I was laughing too hard.

And why the title?  In some circles, he’s known as “Skinny Man”.  That name predates his adopting us, so it sticks.

After a week of temperatures above 100°F (38°C), albeit with low humidity (which is lovely) and a couple of weeks before that out east where the temperatures weren’t quite as high, but the humidity made it much worse, we decided it was time for a respite.

So we headed to the coast, which is just a few hours away.

It was a great call, even if it was for one night.

Down there, the temperature never got above 60°F (16°C) and the persistent fog and low clouds meant that we didn’t see the sun.  It really was a nice change.

And I got to spend time with my feet in the ocean.

That is very good for this soul.

For a few hours in the afternoon on the first day, when this image was captured, I may or may not have had a Blondie song from 1980 playing in my head.  Just something to keep the mind flowing as I kept finding scenes that made me smile.

But that smile might have been from the cool water rushing around my legs and the sand between my toes.

No matter where we are or what we’re doing, this is always my favorite view.

It just makes me smile.

Walking a stretch of the Pacific Crest Trail (PCT) near Pilot Rock in the Cascade-Siskiyou National Monument, just a short drive from our house.

Six years ago today, Skinny said “yeah, I guess I’ll put up with these people”.

So today is our “Gotcha Day”.

We were warned about his “puppitude” back then.  But he was just a young pup, at 3.5 years old.  That means he’s now 9.5 years old, technically the oldest in the house (by far) and has grown that ‘tude into one for the ages.

He sure can be a cranky SOB.  Usually when we aren’t doing exactly what he wants.

A demanding cuss, he is.

And we wouldn’t trade him for the world.

It’s a good thing he stopped for a moment to look regal.  For the previous several minutes, he was licking that patch of snow next to his left front elbow.

Classy dude that he is.

So hang in there for at least another six gotcha days Skinny.

…you can get that thing out of my face now.

Can’t you see that I’ve got myself wedged against the couch so I can sleep upright and keep the kitchen in full view?

Go away, you’re bothering me.

Yeah, I know I’ve been pretty quiet around these parts lately.  I’ve been in school the past couple of weeks, building a new bicycle (more on that later).  Those days are long and exhausting, starting right after sunrise and ending after sunset.

That puts a crimp on taking photos.

Plus, Goddess is doing her school work in the evenings and on the weekends, so we’re doing a lot of waving to each other as we pass in opposite directions.  Our schools are less than a block apart from the each other.

So in the evenings, I get home for what may or may not be 45 minutes with her to sit, have dinner and talk about whatever is going on.  Skinny gets fed during that time.

I know, because I see it.

But within two minutes of Goddess leaving for school, he tries to play me like a a kid would.  “Dad, I’m wasting away!  I haven’t been fed for DAYS!”.

He has become quite vocal in his protests.  It’s quite funny.

Although I try to teach him patience, he gets one last bit of dinner.  If I didn’t, we wouldn’t get any sleep.  Actually, Goddess wouldn’t.  I don’t hear Skinny at night.

Here’s a shot from last winter, from our living room in Germany.  Skinny has been served a portion of his dinner.  He’s just waiting to be released to scarf it down.

Truth be told, he does eat better than most humans.

While I’m attending bike school during the day, Goddess is attending a different school in the evenings (and most weekends).  That means we’re getting to see each other for just a little bit each day, where just a few months ago we were together all day, every day.

We’re both quite busy, working towards our separate goals, which actually meld together quite well and will serve us well in the future.

While she was at school this weekend, Skinny and I decided we needed a breather.  So we headed up into the mountains for some fresh air and hopefully find some autumn color.  We found little color, but a lot of solitude.  And that was a great thing.  Mind you, here in town, the color has popped all over the place.  It’s quite pretty.

From what we were able to find, the small pockets of deciduous trees at that elevation weren’t ready to change much.  Never mind the fact that we were 5,000′ in elevation above town.

But it was interesting to see the small groves of trees on the hillsides reacting to the microclimates, with the lower elevations still in their summer green, while the trees at the top of the grove slowly changing.  We’ll have to go back in a week or so and see how things have progressed.

Don’t get me wrong, the trip was far from disappointing.  Skinny and I were able to walk a stretch of the Pacific Crest Trail (PCT) and find a spot a mile or so from the road, looking over several valleys, without any man-made structures in sight.  Not even sounds from cars or airplanes.

Here’s the view from our little parking area, looking south towards Mount Shasta, some 90 miles distant.  The road is one of the local forestry roads and if you’ll notice the pathway to the lower right, that’s a very small stretch of the PCT.  Only 16 miles to Interstate 5.