After an almost month-long hiatus, winter has returned to the Inland Pacific Northwest. The spring-like weather just needs to wait its turn.

After a fun evening at a fundraiser for one of the local avalanche forecast crews, Goddess and I got the car packed and headed east. We knew a storm was coming and instead of fighting Spokane’s morning rush hour complicated by several inches of snow, we skipped town the afternoon before and landed in the Center of the Universe – Wallace, Idaho.

If you don’t believe me, just ask them. They have even marked it. 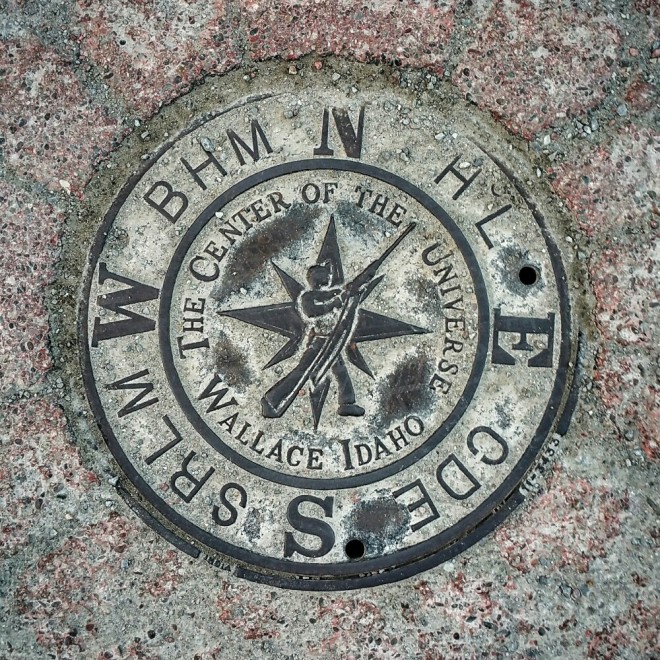 Our decision to skip town early was rewarded when we woke up. The Center of the Universe marker was buried.

The car had about 5″ of light fluffy snow piled on it and it was still coming down heavily. Also, the morning news confirmed our suspicion about the morning commute; you would have thought that it was the first time that it had ever snowed in Spokane. But then again, it seems like that every time it snows, much like every time that it rains in Florida or Southern California. Which is why we avoid those commutes.

Instead, we had a 15 minute drive to the mountain, where it kept snowing all day, adding layer upon layer of ridiculously light cold smoke on the runs.

I won’t bore you with all of the details, but it was a glorious day of floating and face shots. That and hoots and hollers by everyone. Goddess even commented that all of the 60-70 year olds were giddy like teenagers. It was that good.

One of those “teenagers,” a retired heli-ski guide, schooled me as he showed me the way through the trees and steeps to get to a wonderful out-of-bounds area that was completely untracked. After that, he then guided me through a few hidden tree runs right at the front of the mountain, untouched even though they were within sight of the lodge and right alongside the front lift.

Not that tracks were a problem, with the snow continuing and the spread crowd. We were still finding untracked lines at the end of the day on the slopes right in front of the lodge.

But the title has nothing to do with the lines that the almost 70 year-old guided me through. If it did, the tile would be something like “Retired School Boy Grins All Day Long.”

Instead, it was early afternoon and Goddess and I were floating on Cloud 9.

Seriously, that’s the name of the run.

I take off through the trees, hooting and hollering, having a great time. After a few dozen turns, ducks, and jibes, I pop out onto the run to check on Goddess (and to let her know that I’m OK). She is nowhere to be seen, which is confusing, as I can see to the top of the run. That’s when I hear her shout “I’m in the trees!”

I don’t know who was grinning more when she popped out.

She’ll tell you that she didn’t like it that much, but the look on her face told a different story.

By the end of the day, the mountain reported that they had received 9″+ that day of fluff. Here it is 4 days later and they reported this afternoon that since then they have received 48″+ of cold smoke that will stay nice and fluffy this week as the Arctic airmass settles in.

Winter is really here and we’re going to make the most of it.

Hopefully you are too.