The last few weeks have been much more work than play.  Although compared to work in years past, this work is still play.

The days are filled with culling and moving the belongings as well as researching and planning for the long walk.  Other than cataloging items or recording other items before disposing of them, I hadn’t grabbed the camera in almost a month.

It was time to get out for a shoot that wasn’t about working.  Although it was long walk related.

We drove the approximate route of a possible self-imposed deviation from the Pacific Crest Trail (PCT) that we’re considering taking this summer.  It doesn’t really increase or decrease the length of the walk, but might make a minor resupply easier while getting us more consistent access to water on a 30-mile stretch of the trail.

That access means that we’d have to carry less water, which is less weight.  But more exposure to mosquitoes.  It’s a tradeoff we’ll consider along the way and likely not make a call until we’re back here in Oregon.

All while keeping in mind a quote from a much faster thru-hiker than us when referring to part of the trail that we would bypass:

“As soon as we crossed the highway, it was like walking into a wall of mosquitoes.  There were hundreds at a time all day every day.  Carry DEET and a gun to shoot yourself with”.  – Straight Jacket

And we’re considering a route with more water.

Granted, we’ll be later in the season, around mid-August, when the mosquitoes really die off up near the mountain lakes, but they’ll still be an issue.  Perhaps those will be the days that we get in 30 miles per day to just try to get through it.

A bit of manic hiking, perhaps.

Once we covered part of that detour, we hiked, following the PCT north into that bit of what would be mosquito hell in a few months, then turning back south, crossing the highway and hoping to get a good view of Mount McLoughlin.  The day had been clear and I was hoping to get some good late afternoon shots of the snow-covered mountains.

Of course, once we got into a clearing, we could see the clouds moving in.  Mind you, I like the clouds.  They give some interest and texture to what could be  otherwise boring.

But these clouds were getting thicker to the west and really cutting down on the sunlight.  I rushed ahead, tramping over the crusty snow and bare trail to find a good vantage point.  I left Goddess behind and she wasn’t too pleased with that.  But we were losing light.

The view turned out OK.  Not quite what I was hoping for, but it was part of a few hours out on the trail.  That’s always a good thing. 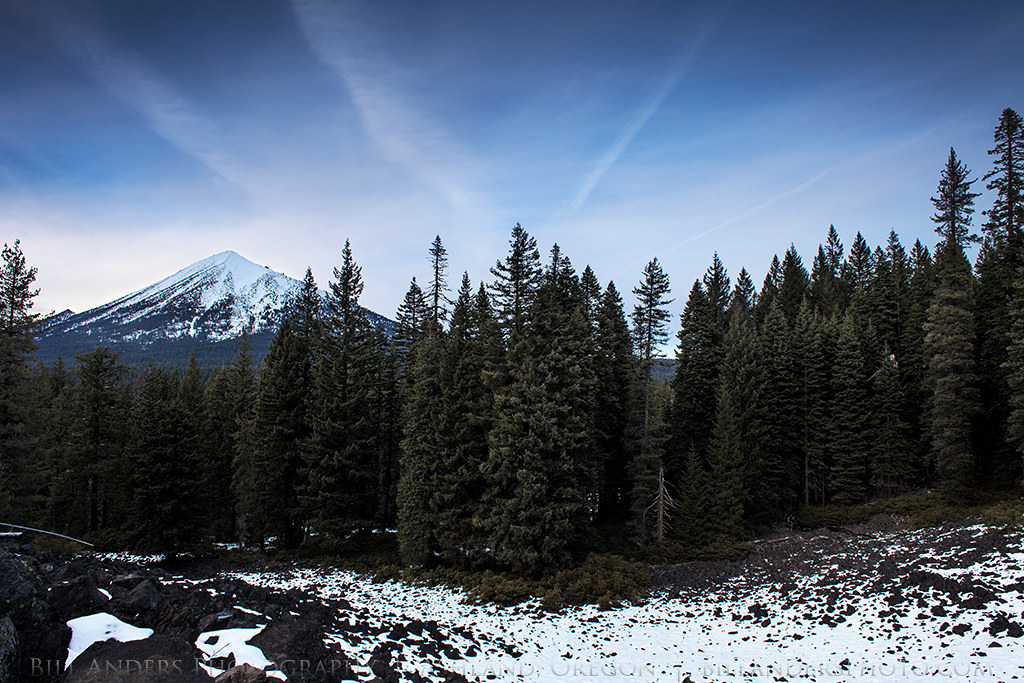 Plus we were able to attend a viewing of a new movie covering the John Muir Trail (JMT), a 210-mile trail in the Sierra Nevada mountains.  During our long walk this summer, we’ll cover about 160 miles of that trail, as they share tread.

The movie is a documentary of two ultra-marathon runners who set a “fastest known time” for the trail back in 2013.  It just so happens that one of the runners, Hal Koerner, owns our local running shop and is a certifiable badass.

This trailer gives a glimpse of some of the beauty that we’ll be walking through.

How’s that for motivation?