Seriously, I needed to remind myself (and Goddess) to do just that.

Over the past couple of weeks, post-duathlon and post-CMM, we’ve been busy taking care of vehicles and getting the house packed.

Vehicles?  We had to take my ‘64 Chevy truck down to my parent’s house for storage.  It made it about halfway before the transmission went thermo-nuclear.  Seriously, on the side of the freeway that thing was white hot, boiling off all the transmission fluid.  So we drug it the rest of the way.  Then the Subbie made a trip to St Louis so it could be shipped to Germany.

Then the house was packed.

But in the meantime, a good friend made it to Nashville.  So we made a trip, had some drinks, and enjoyed his reminiscing of growing up in that town while seeing (through his eyes) how things have changed.

Then last Saturday was the Elton John/Billy Joel concert.  Three and a half hours of some of my favorite karaoke songs.  We definitely had a great time.

The last of the moves is tomorrow morning.

And here’s a pic a couple of hours before the concert.  The shirt says it all (after the sign): 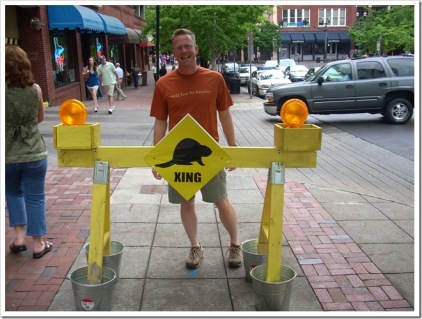 Then we finally made it to the local running club’s monthly meeting.  We got to meet Runnermom, as well as the guy who I suspected was drafting during the duathlon.  I recognized him, then when we met he said “Hey, I read your blog”.  It could have been awkward, but it wasn’t.  Good folks all around.

Finally, over the weekend Goddess prevailed and I finally set up a Facebook account.  It has been everything I feared, namely a huge time suck.  But then again, I’ve already talked to people I haven’t seen in over 20 years, so it’s a good thing.

In the meantime, man I’ve really got to get a run or two in.  Next weekend is the 10-hour overnight “Run Under the Stars”.  I haven’t put a single mile in in the past two weeks thanks to all of the other activities.  Hopefully it just means that I’m well-rested.

I may or may not get a race-report in after that one.  I finish at 6am Sunday morning, run a 5K (Run for Beer) at 5pm Sunday afternoon, then fly to Germany on Tuesday.  So I’ll fit it in when I can.

One thought on “Breathe!”